One annoying thing about Imap clients like Thunderbird is you can end up getting a bunch of duplicate messages in various folders from copying messages from your Inbox. For instance, I have one folder with about 17,000 messages in it and a bunch of duplicates that are just taking up space, bandwidth and CPU cycles when I open that folder.

This is where a really nifty Thunderbird plugin comes in handy with the amazing name of “Remove Duplicate Messages“. With a simple download, install and a restart of Thunderbird and I found I had about 1,000 messages that were duplicates in that folder, or almost 6% of the folder. In another folder that has my NANOG mailing list, I found about 10% of the messages were duplicates.

The defaults are pretty sane, where it will keep the first message it finds and delete all duplicates after that message. Just right click on the folder (control-click for Mac OSX) and you will see in the menu “Remove Duplicate Messages…”. It will start to scan your folder and then give you a list of duplicate mail it found. You can scan through what it though where dups to verify and then click “Delete Selected” to have it move to the trash the duplicate messages. Quick and easy.

I have recently “retired” from a 9 to 5 life and hence I have a couple of spare minutes to rant about things in the forum. It may be to a “null” audience or someone may stumble across it and find it useful. Heh, that is what the Internet is all about, a way for anyone to publish ideas and thoughts. “Once more unto the breach”…

And this brings up a story…

In the extreme south/east corner of San Francisco where Alice Griffith is, there is only one broadband provider, Comcast. They really were not that interested in helping this project out as they already have a contract with the city to provide cable to the housing development as part of their franchise. The other San Francisco broadband provider is AT&T (aka, Pacific Telephone and Telegraph, Pacific Bell, SBC). AT&T did not install DSL in this area. With that, in order to get broadband to Alice Griffith, San Francisco was about to ink a deal with AT&T for two DS-1 connections that would give Alice Griffith 3Mb/s for $1,300 a month(1). You would think that since Pacific Bell’s original corporate office was located in San Francisco that AT&T would have some interest in helping out 3 Mb/s of broadband. Nope. They wanted the bucks.

Right now, wholesale broadband costs anywhere from $10 a month per megabit to say $100 a month. At my company we get it on the cheaper end of that range. With the assumption that AT&T needs to cover say $30 a month for the wholesale cost of 3 Mb/s, that leave a tidy profit of $1,270 per month.

Ok, we need to count in the cost of the copper to Alice Griffith. AT&T typically charges about $12 or so a month for each copper pair to DSL providers. Two DS1s will take either two pairs or four pairs depending on the technology AT&T is using to transport it (HDSL vs. standard DS1). Right now AT&T use 1 pair for DS1. So assuming that AT&T makes zero profit off of the $12 a month they are charging DSL providers (yeah, right), then the cost for the copper is $24 a month. Ok, $1,270 – $24 leaves around $1,246 net profit.

How can AT&T charge this? Simply there is no competition.

Wholesale bandwidth has plenty of competition from folks like AT&T, MFN, MCI, Savis, Level3, XO, Global Crossing, among other “tier one” providers and have dropped bandwidth prices to about 3% of what it cost us in 1990. Like San Francisco, last mile providers have no competition and have not changed their pricing at all. The various telecom acts to reform this has very little if any impact for the end user.

It was interesting that even Comcast didn’t try to make a buck here. They just said no. If you counted on at least two providers providing competition, you would be disappointed.

On the next rant, I am going to look back in San Francisco history for precedents to this issue. 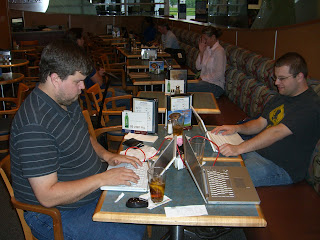 Arriving at SEA/TAC to fly back to San Francisco from NANOG 40, we find that there are two commercial WiFi providers, AT&T and T-Mobile. As our flight was delayed an hour we had a couple of hours to kill so we were “Jones-ing” for a net connection. Fortunately, one of our group had an AT&T account and well all had MacBooks.

So, Pete (on the left) connected to AT&T, shared the connection to his ethernet port which was connected to my MacBook via the red cable and my MacBook was sharing it back out on my WiFi interface so Matt (on the right) could connect. We were all happy campers.

Gads… Has it been more than three years?

Right around the time of the previous post, my father was diagnosed with prostate cancer. This was a relapse and it was pretty far along before it was found. In short, he tried one chemo treatment and it just took him out quicker. He passed away the end of January. About 5 days later, my mother had a stroke that eventually ended her life 10 days after Dad passed away.

Needless to say, this was a very stressful time. Not only both of my parents passing away within days of each other, but I was the executor of the estate and had to address the funeral for both, accounts, lawyers, etc.. My sister Kim, was and still is a great help in this time.

Blogging was definitely not a priority. I only recently look at it again as I am back into a place I can dedicate some time working on it.

I miss both my parents and I am grateful for the help and support I have with my family.

The blog was originally meant to contain rants on democratizing global communications. It is still a very guiding purpose for me, but I want to not box myself into just that here. I hope you won’t mind.

Seems that I have been encouraged by folks to start a blog.

I tell folks that I only want to deal with ISO layers 3 and below but it seems that I get into these rants with folks that apply to 4 and above and they say it should be documented. Hmmm… Ok, I’ll bite.

A little background on me… One of my main “themes” in life is to give tools to the world that help them express their ideas. I have this rather utopian idea that if everyone has tools to exchange ideas then the world will be a better place. Everyone should have access to the printing press and the distribution system to get the ink to the folks that want to read it.

So, I have been involved with starting community radio stations, hooking up personal networks like FidoNet to the Internet, starting ISPs, co-founding anti-spam companies and starting up free community wireless networks.

My actions and thoughts are mainly liberal with some libertarian thrown in.

As you can figure out from above, in the coming posts, I want to cover technology and how it relates to giving folks access to the printing press and distribution.

We’ll both see how this goes… 🙂